Los Angeles, CA (January 16, 2013)—GreenDrop Recycling Stations are an instrumental part of the recycling program at STAPLES Center, the home of the the NBA’s Los Angeles Lakers and Los Angeles Clippers, the Los Angeles Kings and the WNBA’s Los Angeles Sparks.  AEG (Anschutz Entertainment Group) manages the operations at STAPLES Center and as part of their environmental and sustainability programs, they have partnered with Waste Management to increases recycling efforts and decreases the amount of waste going to landfills.  AEG and Waste Management have selected the GreenDrop Stations from Pacific Cascade Corporation to assist with the recycling program at STAPLES Ceenter. 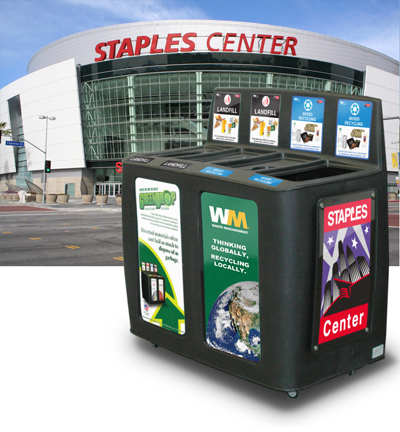 “Partnering with GreenDrop allows STAPLES Center to incorporate a convenient waste-diversion system that patrons can easily utilize without increasing operational costs,” explains Lee Zeidman, Sr. Vice President and General Manager of STAPLES Center. “We evaluated other containers, but GreenDrop was the best option for the arena’s recycling needs.”

Lyle Peters, Director of Sales for the GreenDrop Stations, adds, “160 stations have been deployed at Staples Center and this has been an exciting project for our Pacific Cascade team. We developed custom instructional labels depicting specific items in use. Detailed labels guide guests to quickly and accurately dispose of waste at one orderly stop.”

GreenDrop Recycling Stations are a proven asset when investing in facilities operations and public perception. Contact us to discuss how GreenDrop stations can enhance your recycling/composting program.