The uniquely effective GreenDrop Recycling Station was designed through the efforts of the Portland Trail Blazers Head Office to reduce their environmental footprint while minimizing expenses and being fiscally responsible through sustainable operations. Extensive research, including a university study, took place in developing the GreenDrop Stations by observing public habits and interaction to various recycling configurations. The result was an ADA conforming, four compartment 88 gallon unit made of recycled plastic that allows guests to send food, drinks and compostable plates, cups and utensils to a composter instead of a landfill, while separating recyclable items as well.

In 2010, The Moda Center (formally the Rose Garden arena) earned a LEED Gold rating for existing buildings from the U.S. Green Building Council who identifies and rewards best practices for a building’s energy, water and natural resource performance. An integral part of the certification was their composting and recycling program.

The Moda Center increased its “diversion rate” — the amount of waste recycled or composted — from 38 percent in 2007 to 90 percent in 2011, in part by replacing garbage cans with GreenDrop Recycling Stations. 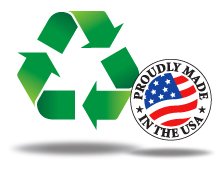